Rowing is not a sport that immediately screams “Philippines!” but certainly one where the Philippines has had some medal success on the international sporting stage. Rowing on La Mesa Dam offers the most complete workout, in arguably the healthiest corner of Metro Manila.

The modern sport of rowing originated on the River Thames, in London, during the 18th and 19th centuries; the most famous and prestigious rowing event in the World is the Henley Royal Regatta, held annually at Henley-on-Thames; and, perhaps the most famous race is the annual battle between the Oxford and Cambridge university rowing teams. But rowing has been noted in ancient history for almost as long as humans have kept records. As early as 1430BC, in Egypt, notable people proficient in rowing (usually in the context of warfare), were acclaimed for their ability to propel one or more people in a boat using oars, at speed

Rowing is completely different from paddling (think canoeing, kayaking or dragon boat racing) insomuch as the person rowing sits with their back to the direction of travel whereas the paddler will always sit facing the direction of travel. Also, unlike paddling, rowers achieve an almost complete body workout – using their arm, leg, back and stomach muscles in a form of low-impact aerobic – whereas paddlers typically only give the upper body a sensible workout. In fact, rowing is one of the best ways for everyone to stay in-shape.

The modern craft used for rowing, known as “racing shells”, are a far cry from the early wooden boats. Today, fibreglass and more exotic materials, such as Kevlar, are used to make the shells extremely light and strong, and to add buoyancy; fibreglass and Kevlar have also replaced the original wooden oars (“blades”), for the same reason.

There are two types of racing shell: the scull and the sweep. The difference is that when rowing a scull you are using two blades (one hand for each), whereas the sweep requires two hands on a single blade. Shells are designed for single, double, four and eight rowers.

Once was a time when all the major universities would have their own rowing teams and the competition was fierce at each annual rowing regatta. At that time the venue was usually the Manila Boat Club on the Pasig River – the oldest sport club in the Philippines, since 1895. Then, by virtue of restrictions imposed under martial law in the 1970-80s and then a drowning accident of a competitor during one race, the universities decided that rowing was too high-risk for their students. Sadly, only the Blue Eagles of Ateneo University maintain a rowing team.

Why La Mesa Dam? It is the closest body of flat water to Metro Manila, without hazards or obstructions, that is available year-round. Previously, the PRA would row in the Pasig River but the number of ferry boats and towed barges has increased to a point where the time available for rowing on any given day was increasingly limited – a river ferry or barge being towed will create a wake-hazard that will swamp most shells. I have rowed on the Pasig River in the past and can attest to the challenge of passing vessels . . . and, despite the sterling efforts of the Pasig River Rehabilitation Commission to improve the river’s cleanliness, you do not want to capsize or be swamped in the Pasig River. 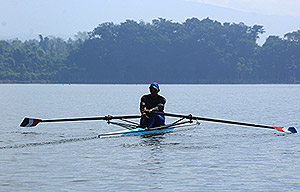 So, La Mesa dam has come to be the home of the PRA and the Philippine Olympic Rowing Team.

Set among richly forested hills, that have valiantly resisted the developer’s chainsaws, La Mesa Dam is spectacular for its beauty and serenity within an otherwise ugly and chaotic metropolitan landscape.

Gliding across numerous kilometres of misty, mirrored lake in the early morning, watched only by curious waterfowl, is more than just a leisurely workout, it is also tonic for the soul and an escape from the hectic pace of life in the teeming metropolis.

Can anyone row at La Mesa Dam? The simple answer is yes – if you join the PRA. Do you have to be an athlete to enjoy rowing? No – anyone who wants to get the best workout to keep themselves in shape can enjoy rowing for relaxation.

Unless you are part of the PRA you cannot row on La Mesa Dam but you do not have to row on the water. The PRA has rowing machines in their training room, so you can actually get your rowing workout, with expert instruction, without ever touching the water. The rowing machines have digital readouts that show your rowing rate, relative distance traveled, time rowing etc. So you can workout in the comfort of indoors and or be competitive with your friends. 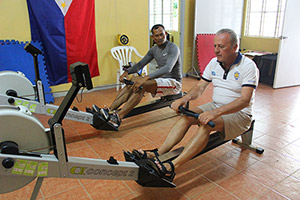 Want to know more about how to get into rowing in the Philippines? You can contact the Philippine Rowing Association on mobile +63 917 536-2165 or, if you are up and active before 8am on any given day (if you get there later in the day there may be nobody available), you can visit the their boathouse at La Mesa Dam, located beside the entrance to the La Mesa Dam Eco Park, Greater Lagro, Quezon City.

You may be interested to know that club rowing is available at: the Manila Boat Club, Del Pan Street, Santa Ana, Makati City; and, at Paoay Lake, Laoag, Ilocos Norte.

You may also be interested to know that there are current plans to offer rowing in Mindanao – in Del Carmen (Siargao), Marawi (Lanao del Sur) and Samal Island (Davao del Norte).

Watch this space for more about rowing in the Philippines and when the ASEAN Games in 2019 will bring the best of ASEAN rowers to La Mesa Dam once more.

Thanks for subscribing!
Powered by MailOptin